Carnegie Libraries: The Future Made Bright

Many Americans first entered the worlds of information and imagination offered by reading when they walked through the front doors of a Carnegie library. One of 19th-century industrialist Andrew Carnegie’s many philanthropies, these libraries entertained and educated millions. Between 1886 and 1919, Carnegie’s donations of more than $40 million paid for 1,679 new library buildings in communities large and small across America. Many still serve as civic centers, continuing in their original roles or fulfilling new ones as museums, offices, or restaurants.

The patron of these libraries stands out in the history of philanthropy. Carnegie was exceptional in part because of the scale of his contributions. He gave away $350 million, nearly 90 percent of the fortune he accumulated through the railroad and steel industries. Carnegie was also unusual because he supported such a variety of charities. His philanthropies included a Simplified Spelling Board, a fund that built 7,000 church organs, the Carnegie Institute in Pittsburgh, the Carnegie Foundation for the Advancement of Teaching, and the Carnegie Endowment for Peace. Carnegie also stood out because some questioned his motivations for constructing libraries and criticized the methods he used to make the fortune that supported his gifts.

The first Oxford Public Library Board formed in 1912, consisting of William J. McConnell, President; Mrs. Edith Lee, Secretary; Oscar B. Wilkins, Township Trustee; Charles Johnson, George Voliva, Frank Lawson, and Mrs. Virginia Steele.  Construction began in 1916 with an Andrew Carnegie Grant of $8000. The lot was purchased from Dr. R.E. Lee for $1200 and the furniture and fixtures coast an additional $1000. The Oxford Public Library officially opened its doors on Saturday, October 6, 1917.

Miss Mable Deeds, Oxford’s first librarian, was hired on June 24, 1916, more than a year before the planned opening so she could attend the summer library course conducted by the Indiana Library Commission. Miss Deeds was said to have spent her life trying to get the right books and the right people together. In a time when farming was the life of most residents, Miss Deeds encouraged both young and old to value the importance of a good book. Miss Deeds served as librarian for 47 years until her retirement on May 10, 1963 at the age of 75. The librarians who have served after Miss Deeds are: Dorothy Law, Ethel Stembel, Barbara Mahoney, Julie Frew, Amanda Dillman, Danielle Payne, Brittany Hays, and Erin McFall-Maxson.

The library was extensively remodeled in 1986 including the installation of new shelving and furniture. The basement was completely redone and converted into the Children’s and Young Adult areas. Public internet access was available beginning in 1995. Wireless access became available in 2010.

In October of the year 2017, Oxford Public Library will be celebrating its 100 year anniversary. Throughout the year, any new books will have a special medal applied to the front to mark this momentous year. In October, there is also a Medieval Fair, hosted by the library for anyone to come and enjoy to further celebrate our library and its history. 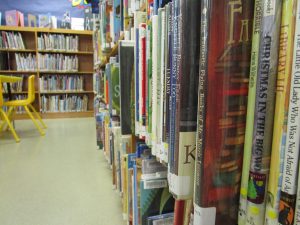